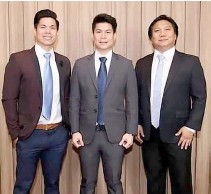 The Chua Brothers of Cavite win three elective posts in the national and local elections on Monday, May 9, 2022. Incumbent Mayor Dino Chua of Noveleta and the oldest among the siblings won a third term; the youngest, Vice Mayor Denver Chua, was elected Cavite City mayor; and Davey Chua garnered the highest number of votes as provincial board member in the first district. IT’S a triple victory for the Chua brothers in the province of Cavite. The eldest of the siblings, Dino Chua, was reelected as Noveleta mayor with 19,260 votes against the 6,656 garnered by his closest political rival, Enrico Alvarez. With the victory, Dino will now serve his third term in office. He ran under the United Nationalist Alliance party. “We owe it to the people! To serve the people is to serve God,” Dino, who also sits as president of Skyjet Airlines, said in an Instagram post. In 2004, the eldest among the Chua brothers became the youngest vice mayor of Cavite City at the age of 23. In 2010, he served as the top provincial board member representing the first congressional district of Cavite (Cavite City, Kawit, Noveleta, Rosario). He also became one of the youngest majority leaders of Cavite Province at the age of 29. In 2016, he was elected as the youngest mayor of Noveleta at the age of 35. In Cavite City, Dino’s younger brother, incumbent Vice Mayor Denver Chua, ended the 18-year reign of the Paredes clan with a landslide victory. The youngest among the Chua siblings, Denver, who ran under the Lakas party, won his mayoral bid with 31,817 votes from the total 129 clustered precincts in the city. Only 24,240 voted for his rival Apple Paredes, daughter of incumbent Mayor Bernardo “Totie” Paredes. The Paredes family ruled the city from 2001 to 2022. “Apparently, with the large margin of votes that I got over my rival, it is very clear that the people of Cavite City want change and they are longing for a new breed of leadership,” Denver said in a statement. The third Chua to win an elective post in the province is Davey who was elected as the top provincial board member for the first district of Cavite. Davey, who also ran under the Lakas party, garnered the highest number of votes with 120,878, ahead of the 65,340 garnered by Romel Enriquez. Before entering politics, the Chua brothers came from a well-known business clan in the province of Cavite. They also have business interests in hotels, petroleum, realty developments, schools and food business, among others. They trace their political roots from the Reyes family being the great grandsons of former Congressman Augusto Reyes Sr., a lawyer who later became justice during the American colonial rule before he was elected as representative of Cavite province in the 1925 Congress.