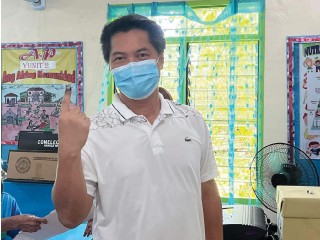 BACOLOD CITY: Mayor-elect Alfredo “Albee” Benitez has named reelected Lone District Rep. Greg Gasataya head of his interim transition team as he bared his administration’s plans for the first 100 days beginning June 30. key to getting things done first 100 days in office. is choosing the right man for the “We mean business. We will job. Thank you, Cong[ressman] execute the eight-point agenda in Greg for accepting the responsibility,” the first 100 days,” he added. Benitez said in a statement. The list includes cleaning up of The incoming mayor, who corrupt practices, which has been ended incumbent Mayor Evelio his main campaign promise, and Leonardia’s bid for a third and the reorganization of City Hall to last term, said he wants to start his increase efficiency. governance the right way. Others are the asphalt overlaying Benitez selected Gasataya to lead of subdivisions and city roads and the transition team, as the lawmaker eradication of “spaghetti” wires. had previously occupied various For peace and order, Benitez posts in the city government, including said the city will provide gasoline being acting mayor. for patrol cars, renovate police “We will assemble a transition stations, establish a high-quality team so there will be no abrupt closed-circuit television system, changes and make sure that people and install solar street lights for are in place,” he said. safety and security. Benitez, a former congressman He added the city government of the neighboring third district will also sign a memorandum of of Negros Occidental, said he has agreement with private hospitals outlined an eight-point agenda to address the lack of health services that he will implement during his and provide adequate health care access. Also on the agenda is the shortterm and long-term plans to renovate the city’s public markets. “Truth hurts.” This was the answer of Benitez to the statement of Leonardia that the vote count that showed his opponent won, especially in areas they consider their bailiwicks, was “simply mysterious and unbelievable.” The win of the former congress“The man ended Leonardia’s 18-year reign in Bacolod. Benitez, who heads Team Asenso, said that it is GP’s prerogative to do whatever they want. But even during the campaign, they already felt their victory as people were coming out of the streets and showing their full support for them. “Hopefully, we can do away with politics since the elections are over and buckle and get to work,” he said. Lawyer Roberto Salazar, the provincial election supervisor, said the Comelec stands by the results in Bacolod City. “He who alleges must prove the allegations,” he said. They can compare the results of the election returns per precinct with the transmitted results, he pointed out. Lawyer Revo Sorbito, city election officer, said it is an insult to employees of Comelec to insinuate that there was cheating and anomaly during the conduct of elections in Bacolod City. “We did everything to ensure that there will be very accurate election results,” Sorbito said.