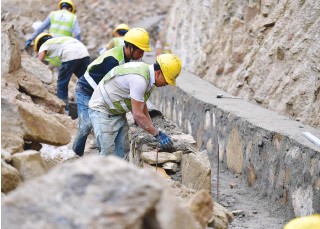 HONG KONG: Asian equities were mostly up Friday following a tumultuous trading period on Wall Street, which rebounded at the close after investors calmed down about US policies to counter surging inflation. World markets have been volatile for much of 2022 owing to China’s Covid-19 lockdowns, Russia’s invasion of Ukraine and as surging inflation weighed on consumer sentiment. The Federal Reserve (Fed) last week had announced its largest rate hike since 2000 and signaled that similar increases were likely in the coming months — a possibility that sent markets on a rollercoaster. “Macro-economic concerns have continued to weigh heavily on the equity markets this week, as stagflation and recession fears continue to dampen investor enthusiasm,” said Lewis Grant of Federated Hermes Ltd. He added that the fears have been echoed in forecasts by major companies, with a large number of firms citing supply chain concerns. Wall Street was mixed Thursday after another day of volatile trading, with the Dow falling for the sixth straight session but the Nasdaq mustering a small gain. The small rebound on the techrich Nasdaq came after Fed Reserve chief Jerome Powell — confirmed Thursday by the Senate for a second term — expressed confidence that the economy is strong enough to withstand tighter monetary policies. According to Bloomberg, Powell reaffirmed that the Fed was likely to raise rates by a half point but isn’t “actively considering” a 75-basis-point move. In Asia, Hong Kong, Tokyo, Seoul, Singapore and Sydney opened higher on Friday, while Wellington traded in the negatives. Dread has not only sent traditional markets seesawing, but the cryptocurrency realm also saw great volatility this week. Bitcoin tumbled to the lowest level since late 2020, following a dramatic collapse in some socalled stablecoin cryptocurrencies — TerraUSD and Tether. The two stablecoins — which are supposed to be pegged to the dollar — proved to be anything but, as they saw their values collapse. While the digital currency market stabilized by Friday, Stephen Innes of SPI Asset Management said, “The 7-day moves in some of the ‘other crypto experiments’ on monster volume are insane and increasingly difficult to watch.” Bitcoin slumped below $27,000 before recovering a bit, trading recently at $28,710. Oil remained up on Friday, with US benchmark crude WTI trading at more than $107 a barrel. “As long as the war continues and macro pressures persist, it is likely that both energy names and value stocks will remain relative safe-havens for fullyinvested, long-only equity investors,” said Grant of Federated Hermes Ltd. Key figures at around 0230 GMT Hong Kong - Hang Seng Index: UP 1.7 percent at 19,705.86 Shanghai - Composite: UP 0.3 percent at 3,064.32 Tokyo - Nikkei 225: UP 2.7 percent at 25,421.84 (break) Brent North Sea crude: UP 1.4 percent at $108.90 per barrel West Texas Intermediate: UP 1.2 percent at $107.36 per barrel Euro/dollar: UP at $1.0387 from $1.0382 at 2100 GMT Thursday Pound/dollar: DOWN at $1.2212 from $1.2199 Euro/pound: DOWN at 85.06 pence from 85.08 pence Dollar/yen: DOWN at 128.36 yen from 129.97 yen New York - Dow: DOWN 0.3 percent at 31,730.30 (close) London - FTSE 100: DOWN 1.6 percent at 7,233.34 (close).