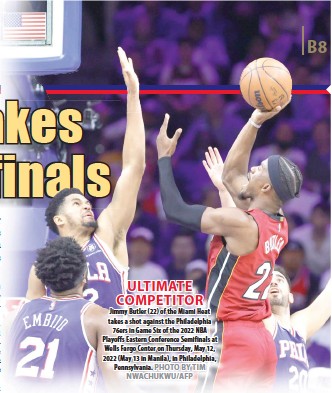 LOS ANGELES: The Miami Heat punched their ticket to the NBA’s Eastern Conference finals with a 99-90 victory over the Philadelphia 76ers on Thursday (Friday in Manila) as the Dallas Mavericks staved off elimination in the West. Jimmy Butler scored 32 points to fuel the Heat against his former team, the victory in Philadelphia giving Miami a 4-2 triumph in their best-of-seven second-round series against the 76ers. “I think he’s one of the ultimate competitors in this profession,” Heat coach Erik Spoelstra said of Butler. “He was brilliant all series long. “He saw there was an opportunity to end this tonight and he wasn’t going to let this get to seven (games).” But the Phoenix Suns, the top seeds in the West after amassing the best regular-season record in the league, will head home on Sunday (Monday in Manila) needing a game-seven victory after falling 113-86 to the Mavericks in Dallas. Luka Doncic scored 33 points, grabbed 11 rebounds and handed out eight assists for the Mavericks, who seized control in the second quarter, closing the first half on a 19-6 scoring run to take a 60-45 lead. The Suns, who coughed up 22 turnovers leading to 29 Dallas points, didn’t get the deficit to single digits in the second half and trailed by as many as 27. Deandre Ayton led the Suns with 21 points while scoring star Devin Booker finished with 19 and veteran point guard Chris Paul was held to 13 on four-ofseven shooting. Doncic, meanwhile, shone on all fronts, adding four steals while surrendering just one turnover to help the Mavs shake off a blowout defeat in game five. Reggie Bullock added 19 points and Jalen Brunson scored 18 for Dallas, who still face a tall order having not won a game in Phoenix since 2019. As the Mavs gear up for game seven on the road, the Heat await either the defending NBA champion Milwaukee Bucks or Boston Celtics. The Bucks take a 3-2 lead in that series into game six on Friday in Boston.