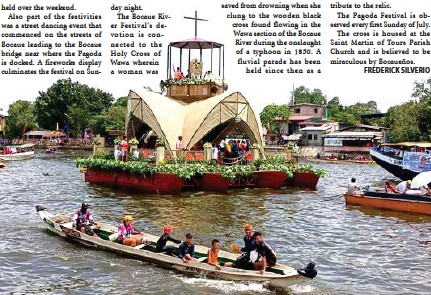 A GRAND fluvial parade known as the Bocaue River Pagoda Festival was held in Bocaue, Bulacan on Sunday, as part of the town’s annual celebration of the feast of the Mahal Na Poon Ng Krus Sa Wawa (Holy Cross of Wawa). Bocaue Tourism head Rennan Eusebio said thousands of residents and devotees gathered to witness this year’s simple fluvial parade in Bocaue River where the venerated wooden cross was carried by a floating pagoda. Bocaue Mayor Jonjon Villanueva, Vice Mayor Sherwin Tugna and members of the Sangguniang Bayan also participated in the Ligiran sa Ilog Bocaue aboard three motorized boats. Included in the weeklong celebration was the nine-day religious procession for the Martyrs of Pagoda 1993 where selected devotees joined the traditional river procession roving around the Bocaue River, particularly in Barangay Bunlo and Bambang where the ill-fated Pagoda sank on July 2, 1993 that claimed 260 lives. A Gabi ng Parangal, Pasasalamat at Musika and a boat racing competition were also held over the weekend. Also part of the festivities was a street dancing event that commenced on the streets of Bocaue leading to the Bocaue bridge near where the Pagoda is docked. A fireworks display culminates the festival on Sunday night. The Bocaue River Festival’s devotion is connected to the Holy Cross of Wawa wherein a woman was saved from drowning when she clung to the wooden black cross found flowing in the Wawa section of the Bocaue River during the onslaught of a typhoon in 1850. A fluvial parade has been held since then as a tribute to the relic. The Pagoda Festival is observed every first Sunday of July. The cross is housed at the Saint Martin of Tours Parish Church and is believed to be miraculous by Bocaueños.