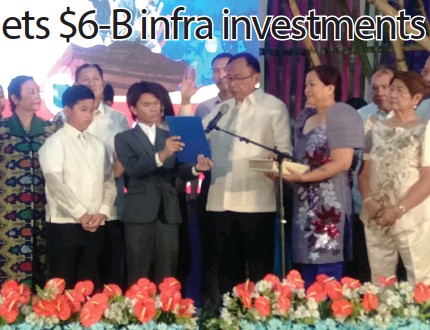 TUGUEGARAO CITY: Cagayan Gov. Manuel Mamba has lined up a $6-billion investment program for infrastructure projects including a new airport, a seaport, and a smart city economic hub for the province. Mamba said he would also further establish plans and link with investors to achieve programs “to make Cagayan province the international gateway in the north.” He officially took oath for his third consecutive term on June 30 before Barangcuag village head Clarito Cadiz of Tuao town, a bailiwick of the Mambas. Cadiz’s village delivered 763 votes for Mamba while Dr. Zarah Lara, the governor’s opponent, got zero votes. Mamba has garnered 302,205 votes to win as Cagayan governor over Lara’s 278,562 votes in the May 2022 elections. Four other village heads who registered almost 100 percent votes in their areas for Mamba — Narciso Espejo of Dalupiri in Calayan, Artemio Archibido of Malalinta, Tuao, Rolando Lumboy of Dagupan, Tuao, and Francisco Genoma of Battung, Tuao town — were witnesses. The governor was accompanied by his wife, lawyer Mabel Mamba, and their children, brothers, and other family members. “They say that I never made accomplishments and developments in my past six years in office. Let our projects and programs such as the No Barangay Left Behind speak,” he said. The governor has condemned plunder and graft charges lodged against him by his political rival Third District Rep. Joseph Lara before the Ombudsman. “If I had been a corrupt politician, I would have been very rich by now,” he said. “We would be the next Singapore in the country. The future is ours,” he said, adding that new markets will be opened for “vast agricultural resources in the province.”