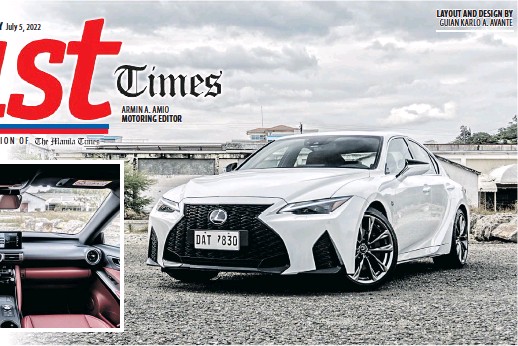 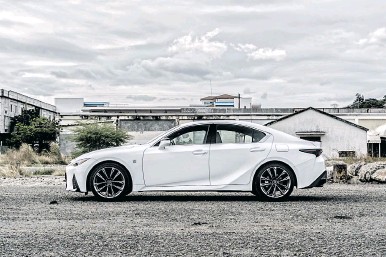 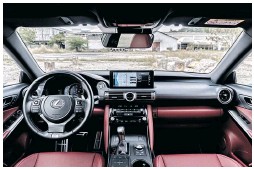 EVERY luxury car brand has its own unique selling point that sets itself apart from its rivals. BMW is known for sportiness, while Mercedes-Benz is known for comfort. As for Lexus? It is not as straightforward as it seems. You have comfortable and quiet luxury cars like the ES and RX, but on the other side of the spectrum, you also have a sports sedan like this Lexus IS 350 F Sport. While this is not a completely new vehicle from the ground up, it represents a new chapter on how the brand will standardize the signature driving dynamics of its vehicles. As mentioned, the Lexus IS 350 F Sport is not an all-new model. Rather, it is a heavy refresh of the current thirdgeneration IS that debuted in 2014. Still, Lexus managed to massage every single detail of the IS to make it look imposing and authoritative, especially in this F Sport model. Whereas BMW’s large kidney grilles look controversial and out of place, the IS’ even larger spindle grille looks well integrated into the car’s overall design theme. The side and rear ends look just as good, with that short rear deck giving it sporty proportions, while its full-width LED taillights give it a distinct light signature at night. If there is one aspect where it is clearly evident that this IS is not an all-new model, that would be its interiors. Aesthetically speaking, it looks very distinct, especially in this F Sport model’s optional red interior scheme and digital gauges. Material quality is also surprisingly good, although there are more scratchy hard plastics down its dash and door panels compared with its German rivals. Still, most of what made Lexus interiors extremely ergonomic are present, such as the supremely on-point driving position, relaxing sports seats, and easy-to-use controls, though the convoluted and confusing touchpad-based Lexus Remote Touch infotainment system is not one of them. At least it can now be controlled via the touch screen and can bypass the interface altogether via Apple CarPlay and Android Auto. Space is good at the front, although it is not the case when it comes to the cramped rear seats. It is even worse in the middle seat since the transmission tunnel is so large and obtrusive. Its 450-liter trunk is about average for the class, however. But irritation towards its cramped rear seats and convoluted infotainment system are thrown out of the window the moment you take the Lexus IS 350 F Sport out for a spin. The naturally aspirated 3.5-liter V6 that produces 312 hp and 380 Nm does not have the mountainous amounts of torque that its turbocharged German rivals have, but this encourages the driver to rev the engine. As a result, you will discover that it has the best-sounding engine at its price point since all its rivals have resorted to small, turbocharged engines. Admittedly, you do not get the low-end shove from the Germans, so oftentimes, it does not feel as fast, subjectively speaking, but the aural pleasure and progressive handling that you get more than makes up for it. The level of precision behind the wheel is not as sharp as the class benchmark, the BMW 3 Series, but the IS comes remarkably close. The accompanying 8-speed automatic is also a willing dance partner, though the Bimmer’s ZF 8-speed is still the class benchmark. Where the Lexus clearly pulls ahead is in terms of ride. The IS manages to be not just sporty, but it still offers a delicate ride that the brand has been known for — even if the suspension is in its firmest setting. That is not the case with the Bimmer’s firm suspension. As for the rest of the driving experience, it is also typical Lexus. Refinement is good, though, since the IS is still riding on an older platform, there is a bit more road noise compared to its German rivals. It is not noisy, mind you, but the Germans have pushed ahead in that respect just that little bit. Chassis rigidity and high-speed stability are also excellent since the structure has been heavily refreshed to offer more precise handling and a better ride. On the downside, that 3.5-liter V6 engine means that its fuel economy is not as good as its German rivals. This car was averaging at around 9.3 to 10.3 km/l, though I do think it is a small price to pay for a car that sounds this good and offers this much performance. The Lexus IS 350 F Sport may not be completely new from the ground up, but it opens a new era for the Japanese luxury automaker. Despite being a sports sedan, it does not compromise on the values that made Lexus famous in the first place. This is a sports sedan that has been blessed with what is called the “Lexus Driving Signature.” The result is a sports sedan that is not just fun to drive but also relaxing and comfortable when you need it. These are values that make the IS stand out. If this is how every Lexus vehicle moving forward will be developed, then we are in for a future that is worth getting excited.