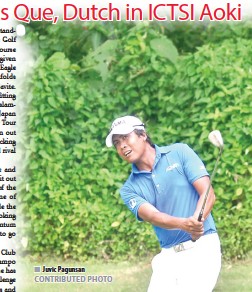 THE forecast of rains notwithstanding, the men of the Philippine Golf Tour look to pound the Aoki course and provide some stellar play given their form and class as the ICTSI Eagle Ridge at Aoki Invitational unfolds today, July 5, in General Trias, Cavite. And there couldn’t be a more fitting opener to what promises to be a slambang week than pitting the two Japan Tour campaigners making their Tour return and the recent champion out to make it two-in-row after hacking out a playoff win over a fancied rival at Splendido Taal. Juvic Pagunsan, Angelo Que and Dutch Guido Van der Valk slug it out at 8:30 a.m. on the first hole of the Isao Aoki-designed layout, one of the championship courses inside the expansive golf complex, each looking for a strong start and the momentum needed in a title chase tipped to go down-to-the-last shot or putt. Eagle Ridge Golf and Country Club general manager Antonio Ocampo said that while the par-72 course has been prepared and set up to challenge the country’s leading pros’ skills and wits, including its last line of defense, he expects low scoring in all four days of the P2 million championship. “Rain is forecasted for the week. The greens are sleek but are rolling well and we expect excellent low scores because of the caliber of these pros,” said Ocampo. He added the roughs aren’t too high, virtually making it negligible, although the course remains challenging with many levels of difficulty present. As it stands, Pagunsan is the marked player, particularly after the former Asian Tour No. 1, who has not played on the Pilipinas Golf Tournaments Inc.-organized circuit since posting a record four-leg sweep in 2019, put himself in pre-tournament conversation with a runaway victory in a pro-am event last week. Que is the other multi-titled player tipped to contend for the crown in the tournament put up by ICTSI with the former three-time Asian Tour champion also raring to mark his Tour return with a top podium finish after a tied for 11th effort in his last PGT event, also here last year. But the field is full of pros in blistering form, including Van der Valk, who foiled two-time Philippine Open titlist Miguel Tabuena in sudden death to win the last PGT tournament at Splendido Taal, along with veteran Tony Lascuña, Jerson Balasabas, Joenard Rates and Zanieboy Gialon, who dominated the inaugural Caliraya Springs leg in Cavinti, Laguna last April. Lascuña, for one, has put premium on power while stressing the need for solid iron play to set up good birdie opportunities and fuel his title drive in the 72-hole championship.