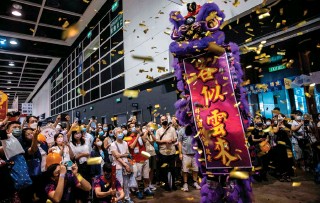 HONG KONG: Asian markets mostly fell on Friday, winding back some of the previous day’s rally, as traders come to terms with the likelihood that central banks will continue to raise interest rates to battle runaway inflation. Equities surged across the region on Thursday after the closely watched US consumer prices index (CPI) eased more than expected in July, boosting hopes the Federal Reserve (Fed) could slow down its pace of monetary tightening. A similarly upbeat report on the producer price index (PPI), which can act as a guide to future CPI readings, provided further reason for optimism. However, the feel-good vibe wore off in US trading after Fed officials lined up to warn that there was a long way to go before inflation, which is still sitting around four-decade highs, is tamed. San Francisco Fed chief Mary Daly was the latest to bring markets down to earth, telling Bloomberg TV that the data were “significant in that they are saying that we’re seeing some improvement but they’re not victory.” She added she would likely support a half-point hike at next month’s meeting, but was open to a third successive three-quarter-point lift if the data showed it was needed. Daly also tempered hopes that the bank could begin cutting borrowing costs next year if prices are brought down and said they would be held for a period before any reductions are made. “I don’t see this hump-shaped part where we raise interest rates to really high rates and then bring them down,” she said. “I think of raising them to a level that we know is going to be appropriate and then holding them there for a while so that we continue to bring inflation down until we’re well and truly done.” Her comments follow similar warnings by two colleagues on Wednesday. The yield on 10-year US Treasury notes rose Thursday, reflecting expectations the Fed will press on with its sharp rate increases. After starting out brightly, Wall Street ended broadly negative with the Nasdaq leading losses. And Asia also struggled to maintain momentum, with Hong Kong, Shanghai, Sydney, Seoul, Singapore, Manila, Jakarta and Wellington all slightly lower. Tokyo, however, jumped more than 2 percent and investors there returned from a one-day break to play catch-up with Thursday’s bounce. Taipei also rose. Terri Jacobsen at UBS Financial Services expected traders to continue to face volatility for some time. “There are going to be headwinds for the markets until we get some resolution on how far the Fed is going to go and how long they’re going to raise interest rates,” he said. There was also a worry that because the drop in CPI and PPI was helped by a plunge in oil prices, they could easily spiral higher again if crude markets rallied. With the Ukraine war showing no sign of ending soon, and the US economy apparently resilient to rising interest rates, there was a good chance crude could rocket from its current six-month lows. “The risk of higher oil prices going into year-end are elevated, so this moderation in inflationary pressures might not last,” said Oanda’s Edward Moya. “The economy is in too good shape for further crude demand destruction to occur and that should keep oil prices supported well above the $90 level.” Key figures at around 0230 GMT Tokyo - Nikkei 225: UP 2.4 percent at 28,479.99 (break) Hong Kong - Hang Seng Index: DOWN 0.1 percent at 20,069.52 Shanghai - Composite: DOWN 0.1 percent at 3,277.34 Euro/dollar: DOWN at $1.0308 from $1.0326 Thursday Pound/dollar: DOWN at $1.2182 from $1.2196 Euro/pound: DOWN at 84.61 pence from 84.65 pence Dollar/yen: UP at 133.38 yen from 133.05 yen West Texas Intermediate: DOWN 0.7 percent at $93.68 per barrel Brent North Sea crude: DOWN 0.7 percent at $98.94 per barrel New York - Dow: UP 0.1 percent at 33,336.67 (close) London - FTSE 100: DOWN 0.6 percent at 7,465.91 (close).