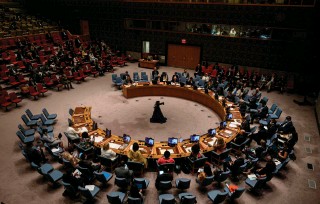 United Nations, United States: The head of the UN nuclear watchdog warned an emergency Security Council meeting on Thursday (Friday in Manila) of the “grave” crisis unfolding at the Zaporizhzhia nuclear power plant in Ukraine, as Moscow and Kyiv traded accusations of new shelling near the facility. “This is a serious hour, a grave hour,” Rafael Grossi, chief of the International Atomic Energy Agency (IAEA), told the Security Council, adding that the IAEA must urgently be allowed to conduct a mission to Zaporizhzhia. And in Kyiv, Ukrainian President Volodymyr Zelenskyy accused Moscow of “nuclear blackmail” as he urged the international community “to react immediately to chase out the occupiers from Zaporizhzhia.” “Only the Russians’ full withdrawal... would guarantee nuclear safety for all of Europe,” Zelenskyy said in a video address to the nation. Moscow and Kyiv on Thursday accused each other of new shelling near the Zaporizhzhia nuclear power plant, a dangerous escalation five months into the war. Both sides said there were five rocket strikes near a radioactive material storage area at the plant, Europe’s biggest nuclear facility which has been a focus of renewed fighting in recent days. Ukraine’s nuclear agency Energoatom said later there had been fresh Russian shelling near one of the plant’s six reactors that had caused “extensive smoke” and “several radiation sensors are damaged.” Vladimir Rogov, a member of the Moscow-installed regional administration, said Ukrainian forces had “once again struck” the plant. The Ukrainian plant is under the control of Russian troops, and Ukraine has accused Moscow of basing hundreds of soldiers and storing arms there. ‘Cannot wait any longer’ In New York, Security Council members all supported calls for an urgent IAEA mission to Ukraine — but there was no consensus over who was to blame for the attacks and who should be responsible for facilitating the mission. Bonnie Jenkins, the US State Department’s undersecretary for arms control and international security, said the visit “cannot wait any longer” but added that only a full withdrawal of Russian troops from Ukraine would keep the nuclear plant safe. “This would allow for Ukraine to restore the impeccable safety, security, and safeguards performance it upheld for decades at the facility.” But Russia’s UN ambassador Vasily Nebenzya put the blame for the attacks around Zaporizhzhia squarely on Ukrainian forces. “We call on states that support the Kyiv regime to bring their proxies into check to compel them to immediately and once and for all stop attacks on Zaporizhzhia nuclear power to ensure the safe conditions for the conduct of the IAEA mission,” Nebenzya told the Council. Earlier Thursday Washington also backed calls to establish a demilitarized zone around the plant. ‘State sponsor of terrorism’ The Soviet-era plant in southern Ukraine was captured by Russian troops at the beginning of March — shortly after Moscow launched its invasion of its neighbor — and has remained on the frontline since then. Zelenskyy has warned Russia could cause an incident “even more catastrophic than Chernobyl” — a reference to the nuclear disaster in then-Soviet Ukraine in 1986. “Russia has turned the nuclear station into a battlefield,” he said earlier Thursday, addressing a Ukraine donors conference in Copenhagen by video link. He called for stronger sanctions against Russia, saying it was a “terrorist state” — on the same day that Latvian MPs adopted a resolution calling Russia a “state sponsor of terrorism.” The statement said Russia’s actions in Ukraine constituted “targeted genocide against the Ukrainian people.” Ukrainian Foreign Minister Dmytro Kuleba hailed it as a “timely move” and urged other countries to follow suit, while Russian foreign ministry spokesman Maria Zakharova called it “xenophobia.” Latvia has also urged all EU countries to ban tourist visas for Russian citizens and said the measure should be extended to Belarusians because of the Belarusian regime’s support for the invasion. ‘We hope for the best’ The war, meanwhile, rumbled on in eastern Ukraine, where Russiabacked separatists have been fighting against Ukrainian forces since 2014. In the bombed-out town of Soledar, the few residents left are living in underground shelters. “We hope for the best, but every day it turns out worse and worse,” said Svitlana Klymenko, 62, as the relentless shelling continued outside. Another man living in the shelter, 59-year-old Oleg Makeev said: “You can’t cook anything normally here, you can’t wash yourself. How am I supposed to feel?”