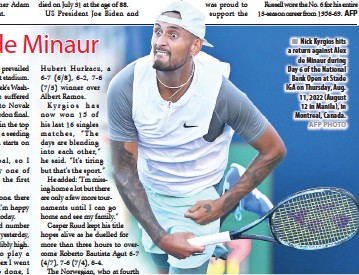 MONTREAL: Nick Kyrgios crushed fellow Australian Alex de Minaur 6-2, 6-3 on Thursday (Friday in Manila) to reach the quarterfinals of the ATP Montreal Masters. Kyrgios carried on a constant backchat with his player box, giving almost a running commentary of his state of mind on court in a display that seemed second nature to him. Nevertheless, the Wimbledon runner-up dominated in the allAussie match, winning the opening set at a clip of three minutes per game in a contest which took just 64 minutes. The second-set pace was just as torrid, with Kyrgios breaking in the opening game. He failed to serve out the win leading 5-2, missing on a drop shot and sending a forehand into the net. But de Minaur lost the next game to love as Kyrgios prevailed in front of a packed-out stadium. The winner of last week’s Washington 500 series title suffered his only recent loss to Novak Djokovic in the Wimbledon final. Victory means he’ll be in the top 30 next week, meaning a seeding at the US Open which starts on August 29. “That was my goal, so I didn’t have to play one of the (tennis) gods in the first round,” Kyrgios said. “Today was a tough one. there was a lot on the line. I’m happy with the performance today. “After beating (world number one Daniil) Medvedev yesterday, my confidence is incredibly high. “It’s never easy to play a friend, but against Alex I went out and got the job done, I played how I had to play,” said Kyrgios who next faces eighth-seeded Hubert Hurkacz, 6-7 (6/8), 6-2, 7-6 (7/3) winner over Albert Ramos. Kyrgios has now won 15 of his last 16 singles matches, “The days are blending into each other,” he said. “It’s tiring but that’s the sport.” He added: “I’m missing home a lot but there are only a few more tournaments until I can go home and see my family.” Casper Ruud kept his title hopes alive as he duelled for more than three hours to overcome Roberto Bautista Agut 6-7 (4/7), 7-6 (7/4), 6-4. The Norwegian, who at fourth is the highest seed still standing, said he regrouped during a 69-minute interruption as thunderstorms passed over the area after two sets had been completed. He said time in the locker room was the perfect antidote for a game which had gone slightly stale as he battled the Spaniard.