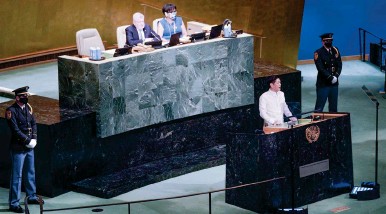 PRESIDENT Ferdinand “Bongbong” Marcos Jr. and his American counterpart Joe Biden will meet here this week, Malacañang confirmed on Tuesday. Marcos, who arrived in New York City on Sunday, will hold a bilateral meeting with Biden, who will host a reception on September 21 (September 22 in Manila) for all heads of state attending the United Nations General Assembly (UNGA). In July, Philippine Ambassador to the US Jose Manuel Romualdez said Biden invited Marcos to come to the US through a handwritten letter brought by US second gentleman Douglas Emhoff, who was his personal emissary to the Filipino leader’s Aside from Biden, Marcos is also expected to meet with Japanese Prime Minister Fumio Kishida in New York City on Wednesday. During his meeting with the Filipino community in New Jersey on Sunday, the President expressed hope his trip to the US will be a fruitful one as he plans to meet with Biden, and other world leaders, underscoring the strong ties between the two countries. The President said his trip will also include meetings with business leaders who can potentially invest in the Philippines, especially as the country slowly recovers from the Covid-19 pandemic. He said he will be explaining the reforms carried out by his administration to encourage them to bring their businesses to the country. Among the series of business engagements lined up for Marcos and his economic team are the New York Stock Exchange Economic Forum, dialogues with the US-Asean Business Council and US Chamber of Commerce Business, and the Philippine Economic Briefing which is set on September 22. President Marcos also urged on Tuesday (Wednesday in Manila) all United Nations member states to adhere to the principle of “rulesbased international order” to solve disputes as he reiterated his foreign policy that the Philippines “shall continue to be a friend to all and an enemy of none.” Addressing world leaders during the 77th UN General Assembly, Marcos said that “differences should only be resolved through peaceful means.“ “By reinforcing the predictability and stability of international law, particularly the 1982 United Nations Convention on the Law of the Sea, we provided an example of how states should resolve their differences: through reason and through right,” the President said. Marcos cited the Manila Declaration of 1983 and the United Nations Convention on the Law of the Sea, which “provide useful guidance for our time.” “Amidst challenging global tides, an important ballast stabilizes our common vessel. That is, our open, inclusive, and rulesbased international order that is governed by international law and informed by the principles of equity and of justice,” he said. The President’s call came as he warned of the effects of “widening geopolitical polarities and sharpening strategic competitions” in the international political landscape. “A profound lack of trust is putting enormous strain on our multilateral system. Our very charter is being violated around the world as we speak. In Asia, our hard-won peace and stability [are] under threat by increasing strategic and ideological tensions,” Marcos told UN member states, without mentioning countries. The President said these violations require the international community’s action to “uphold the ideals” that led to the establishment of the UN. He noted the global “existential threat” of nuclear weapons despite international agreements designed to avert their use. His statement came amid high tensions between China, Russia, and the US and its allies amid the Ukraine-Russian war and disputes in the Indo-Pacific region. In July, Marcos said he would “find ways to work to resolve the conflicts that we have” with China over territorial and maritime disputes in the South China Sea. But he vowed his administration will assert the Philippines’ sovereignty in its territories in the resource-rich waters. The 65-year-old leader was among the several heads of state who took the floor during the High-Level General Debate of the 77th United Nations General Assembly. In front of his foreign counterparts, Marcos highlighted his administration’s efforts to promote peace and justice. “I stand today on behalf of 110 million Filipinos. At this time of crisis and opportunity, I bring with me the spirit of their enduring commitment to the ideals of our United Nations,” he stated. “This commitment is reflected in our solid contributions to the cause of peace and of justice, he added. The President also underscored the Philippine government’s contribution to reinforcing the predictability and stability of international law, particularly the 1982 United Nations Convention on the Law of the Sea, wherein the Philippines became an example of how nations should peacefully resolve disputes. Marcos is the first Philippine president who personally attended the UNGA since the Covid-19 pandemic hit in 2019. He was also the first leader of the Association of Southeast Asian Nations (Asean) who delivered a statement during the High-Level General Debate, which was attended by more than 150 heads of state and government. “Never prouder to be a Filipino’ House Speaker Ferdinand Martin Romualdez said he had “never felt prouder” to be a Filipino after listening to President Ferdinand “Bongbong” Marcos Jr.’s message at the 77th United Nations General Assembly. “I have never been prouder to stand as a Filipino in the company of world leaders. It was a great experience to see and hear our President spell out, in clear terms, what we as a people expect from the parliament of nations,” Romualdez said. He emphasized that Marcos’ statements demonstrate how we must all work together to face the critical challenges confronting the world in this generation, and that we must act quickly if society is to survive. “The UN has long been an independent arbiter and an effective facilitator of international dialogue between and among nations. It continues to be our country’s honor to be part of this global family of nations that has continued to remain faithful to its mission of fostering world peace,” Romualdez said. “President Marcos’ call for global unity resonates with each one of us who fears what the tectonic shifts in the world today may bring in the coming century,” he added.