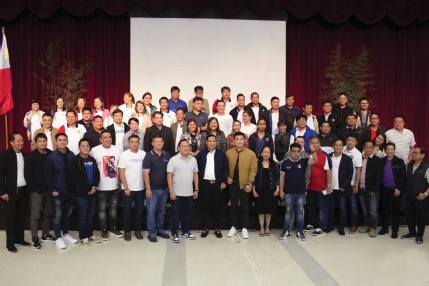 CITY OF MALOLOS: In a rare occasion, the top government officials of Bulacan headed by Gov. Daniel Fernando and Vice Gov. Alexis Castro united in a bid to solve the current issues of the province. The accord was forged during the leadership forum under the theme “Strengthening Governance Through Adaptive Leadership and Management” held at The Manor, Camp John Hay, Baguio City from Sept. 19-21, 2022. City and municipal mayors, vice mayors, speakers, national government agencies, and head departments of the Provincial Government of Bulacan attended the forum. “Let us try to alleviate the problems the people of Bulacan are facing. On the other hand, we must be ready for the opportunities that come our way. We are here today because I know we can solve these problems and we can succeed if we all work together and set aside politics,” Fernando said. For his part, Castro promised the support of the Board Members of the Sangguniang Panlalawigan and assured the governor that the legislature would not be an obstacle to the positive plans of the provincial government. In response, Bocaue Mayor Eduardo Villanueva Jr., president of the Bulacan Mayors League, also vowed to support the governor’s plans for the advancement of the province. The mayors and vice mayors lauded Fernando for his efforts to bring together all the leaders of the city and municipality with the goal of uniting them with no taint of politics but only sincere service towards good governance. “This is not common but it is the right move for a governor to make,” said Pandi Mayor Enrico Roque, who believes that it is time for the new generation of public servants to rise. Among the important issues discussed in the three-day leadership forum are the illegal quarrying and logging, the entry of overloaded trucks in the province, the reclassification of land use, the problem of flooding, the development of infrastructure projects and the strengthening of the economy through the collection of taxes.