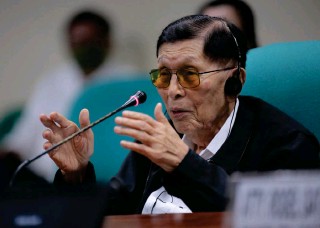 CHIEF Presidential Legal Counsel Juan Ponce Enrile on Wednesday, September 21, said he favors the scrapping of the 1987 Constitution and charter change at this time, but only through a constitutional assembly. “Let’s change the Constitution, but let’s do it through a constitutional assembly,” said Enrile during the continuation of the hybrid hearing of the Senate Constitutional Amendments and Revision of Codes chaired by Sen. Robinhood “Robin” Padilla on the Review and Study of the 1987 Constitution. “Charter change is imperative, it’s needed now. But we do not need a Con-con (Constitutional Commission), that would only cost a lot of money. Congress can do it. Why do we have to hold an election and pay the salaries of people who may not necessarily understand the problems of the nation because they have not experienced these problems,” he explained. While acknowledging that constitutional experts should be consulted, Enrile said he prefers to have public officials elected by the people, “who have to live with the present Constitution and already have an intimate grasp of problems facing the nation” to amend the fundamental law. He said that he personally favors maintaining the presidential form of government, but giving the elected President of the Republic a longer term of office that is to be determined by a constitutional assembly. “We need to amend the Charter because it is a source of our problems as a nation, and it retards our progress. As long as we have the present Constitution we will remain where we are,” he stressed. Asked as to how Charter change could help curb corruption, Enrile replied: “You cannot change the character of the Filipino through Charter change, but you can open up the country to development. The problem of corruption is a question of law enforcement. If you jail the corrupt and seize their ill-gotten wealth, the problem will stop.” According to Enrile, some of the provisions of the 1987 Constitution hinder the nation’s progress. The Constitution actually favors only the rich. It allows them to invest as much as 60 percent in mining, agriculture, transportation, and so on. The rich make lots of money here, but they bring the profits elsewhere. “We should have an investment policy that will protect not only the rich but also the poor. We can control the foreigners but not the rich Filipinos who control our politics, the judiciary, the executive branch, and even the police and the military. While the present setup works to their advantage, the nation suffers,” Enrile added. Told that in every administration, there’s a call for Charter change, Enrile said: “There’s a need for it. Many oppose it for their own personal interests, not the national or public interest. The 1987 Constitution should be amended so that we can have unity in our society. There’s too much debate.”