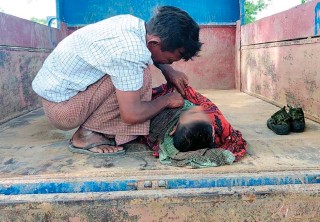 BANGKOK: Myanmar’s military government on Tuesday denied reports it carried out an air attack on a school in the country’s turbulent northwestern region that killed at least seven children, accusing the media of distorting the truth. Maj. Gen. Zaw Min Tun, spokesman for the Southeast Asian nation’s ruling military council, acknowledged at a news conference in the capital Naypyitaw that there had been fighting last Friday in Tabayin township in the Sagaing region. But he blamed the government’s armed opponents for the casualties, which, in addition to children sheltering at the school, included six adult villagers. Witnesses told The Associated Press (AP) and other media that two helicopters fired machine guns and heavier weapons at a school in a Buddhist monastery in the village of Let Yet Kone. The school has 240 students, from kindergarten to Grade 8, who are taught by about 20 volunteer teachers. A school administrator said that after about an hour of continuous shooting, about 80 soldiers charged into the monastery grounds, firing their weapons. The administrator, who used the pseudonym Mar Mar so she would not be identified by the authorities, said about 30 children were wounded and 20 others, plus three teachers, were taken away by soldiers. The number of children killed in the air strike appeared to be the highest in a single day since the military mounted a coup on Feb. 1, 2021, and ousted the elected government of Aung San Suu Kyi. The military takeover triggered mass nonviolent protests nationwide, but when the army and police responded with deadly force, armed resistance arose in the cities and the countryside. Fighting has been especially fierce in Sagaing, where the military has launched several offensives, in some cases burning down villages and displacing more than half a million people. There are six camps hosting displaced people in Tabayin, also known as Depayin. Zaw Min Tun told journalists on Tuesday that the assault occurred when soldiers went to check on information that there were members of the armed anti-government People’s Defense Force (PDF) and their allies from the Kachin Independence Army, an ethnic rebel group, in Let Yet Kone. The PDF was established last year to oppose military rule. He said the armed groups’ members herded the villagers into the monastery ahead of the fighting. “They forced the people to stay under the main building of the monastery. And then they started to fire on the security forces while using the villagers as human shields. The army shot back at them,” Zaw Min Tun said. He added that the army rescued the people hiding at the monastery after the armed groups ran away, and that when the soldiers found two children with serious injuries, they were immediately taken by helicopter to a military hospital. Other wounded villagers were taken to nearby hospitals. The spokesman charged that the accounts of the attack on the school were made up to come just ahead of the annual meeting of the United Nations General Assembly, where Myanmar’s violent crisis will be debated. His account of the incident was challenged by the school administrator. “What Zaw Min Tun said at the news conference were words opposite to the truth. Teaching the students every day is our job. No one forced us into the monastery and there was no armed group in the village,” Mar Mar said by phone on Tuesday.