Leaders warn of divisions over Ukraine at UN 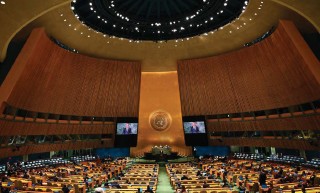 UNITED NATIONS: Ukraine will take center stage at the United Nations on Wednesday (Thursday in Manila) as world leaders warned of a new era of divisions over the war there and other crises, including climate change. United States President Joe Biden will address the UN General Assembly on Wednesday, as will his Ukrainian counterpart Volodymyr Zelenskyy, the only leader permitted to speak by video as the massive annual summit returned in person after two years of coronavirus pandemic restrictions. Other speakers will include Iran’s President Ebrahim Raisi, who flew to New York despite protests in the Islamic Republic after a young woman died following her arrest by “morality police.” Standing at the UN rostrum on Tuesday night, German Chancellor Olaf Scholz said the world was “facing a new fragmentation” after years of hope following the end of the Cold War and his own country’s reunification. “Major global crises are piling up before us and are combining and reinforcing one another. Some have even seen this as a harbinger of a world without rules,” he said. Scholz said Russian President Vladimir Putin, who invaded Ukraine on February 24, would “only give up his war and his imperialist ambitions if he realizes he cannot win.” “We stand firmly at the side of those under attack — for the protection of the lives and the freedom of the Ukrainians, and for the protection of our international order,” he added. World forced to choose sides? Biden is expected to also address Ukraine and the global order. In a break with tradition for US presidents, he did not speak on the first day, as he had traveled to the United Kingdom for the funeral of Queen Elizabeth 2nd. Just as the UN summit was getting underway with the participation of Russian Foreign Minister Sergei Lavrov, Moscow-backed forces announced they were going ahead with a move the West had long warned against: referendums on annexation by Moscow. French President Emmanuel Macron described Russia’s invasion as “a return to a new age of imperialism and colonies” and warned that inaction risked “tearing down the global order without which peace is not possible.” “It’s not a matter of choosing one side between East and West, or North or South. It’s a matter of responsibility” to the UN Charter, he said. “Beyond the war, there is a risk of division in the world for reasons both direct and indirect from the conflict.” But a number of developing nations have resisted Western calls to punish Russia and have voiced unease about the billions of dollars being spent on weapons for Ukraine. “Africa has suffered enough from the burden of history,” said Senegalese President Macky Sall, the current chairman of the African Union, as he pleaded for a “negotiated solution” in Ukraine. “It does not want to be the breeding ground of a new cold war,” he added. Philippine President Ferdinand Marcos Jr., also alluded to tensions between the United States and China. “In Asia, our hard-won peace and stability is under threat by increasing strategic and ideological tensions,” he said. Anger over Iranian woman’s death Macron met on the UN sidelines with Raisi as he pressed for Iran to agree to the revival of a 2015 nuclear accord rejected by former US president Donald Trump. But the nuclear issue appeared overshadowed by scenes of protests in Iran following the death of 22-year-old Mahsa Amini, who was arrested by the unit responsible for enforcing the West Asian country’s dress code for women. Macron said he encouraged Raisi to show “respect for women’s rights,” as dissident groups staging noisy demonstrations in New York said they were filing a new lawsuit against Raisi over previous human rights concerns. Chilean President Gabriel Boric, a leftist former student leader, paid tribute to Amini as he called for “an end to abuses by the powerful everywhere.” UN Secretary-General Antonio Guterres opened the assembly by projecting images of a ship carrying grain out of Ukraine — evidence of how diplomacy can succeed. But he warned that “divides are growing deeper.” “A winter of global discontent is on the horizon,” he said. “Trust is crumbling, inequalities are exploding, our planet is burning. People are hurting, with the most vulnerable suffering the most.” With global temperatures rising and a chunk of Pakistan the size of the United Kingdom recently under water, Guterres lashed out at fossil fuel companies and the “suicidal war against nature.” He called on developed economies to tax profits from fossil fuels and dedicate the funds both to compensate for damage from climate change and to help people struggling with high prices. “Polluters must pay,” the UN leader said.