BY THE MANILA TIMES 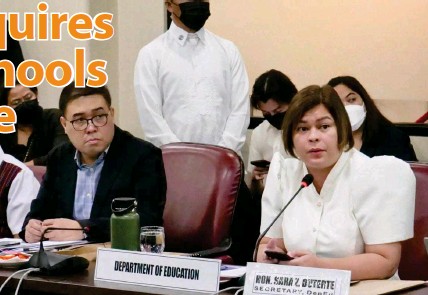 VICE President and Education Secretary Sara Duterte-Carpio signed an amended order requiring private schools to own their sites evidenced by a title of ownership or present proof of bases for continued use of the sites for no less than 15 years. Duterte-Carpio signed DepEd Order 041, s. 2022, on Monday, September 19, amending DepEd Order 088, s. 2010, titled “2010 Revised Manual of Regulations for Private Schools in Basic Education.” “The Department of Education (DepEd) issues the Amendment to DepEd Order (DO) No. 088, s. 2010, as amended by DepEd Order No. 11, s. 2011, titled ‘2011 Revised Manual of Regulations for Private Schools in Basic Education,” the order said. It amends Section 160, “Ownership,” as follows: “Each private school shall own its site, as evidenced by a valid Certificate of Title. If the private school cannot present its title ownership over the school site, such private school should ensure reasonable and adequate bases for continued use of the site through: a) a duly executed deed of sale; or b) a duly executed deed of donation; or c) a duly executed deed of usufruct for a guaranteed period of not less than 15 years; or d) a duly executed lease with an initial guaranteed period of not less than 15 years.” The 2010 revised manual, issued on June 24, 2010, stated that each private school, unless exempted by the DepEd secretary, should own its site, but did not state that it needed to submit documents proving ownership nor did it state the number of years to acquire “ultimate ownership” so long as it was within a “reasonable period.” DepEd Order 041 gives private schools one year from the submission of the deed or contract to submit a certified true copy of the title which “reflects the annotation of the deed or contract.” It warns them that “presentation of spurious titles or contracts by the school shall cause the automatic denial of their application/ or the revocation of their permit. No reason, excuse or requests for reconsideration shall be entertained or accepted.” Meanwhile, Section 189, “Sanctions Against Private Schools,” of the same 2010 DepEd DO is also amended. Sanctions that may be imposed against private schools for any violation of the rules and regulations of the department include suspension of the school’s participation in Education Service Contracting (ESC) and Education Voucher System (EVS) programs; non-issuance of favorable recommendation for tax exemptions; disqualification from any financial grant or subsidy of the department; suspension of the permit or recognition to operate the school; and revocation of the permit or recognition to operate the school. However, “the school may appeal the application of any sanction imposed by a Regional Director to the Secretary within 15 days from receipt of notice of such sanction.” Only the two sections have been amended and “all other provisions in the 2011 Revised Manual of Regulations for Private Schools in Basic Education shall remain effective, unless otherwise amended by other DepEd issuances.” The order signed by the vice president and Education chief takes effect upon publication at the DepEd website www.deped.gov.ph. In an official statement also dated September 19, the Education department clarified the issue surrounding its budget for confidential funds. “Confidential expenses are allowed for all civilian offices, including the Department of Education. This has a solid legal basis as provided under DBM Department of Budget and Management) Joint Circular 2015-01. The threats to the learning environment, safety, and security of DepEd personnel are interlocking with the mandate of support to the national security of civilian offices,” it said. DepEd cited sexual abuse and all other forms of violence, graft and corruption; involvement in illegal drugs of learners and personnel; recruitment to insurgency, terrorism and violent extremism; child labor; child pornography; and recruitment to criminal activities, gangsterism and financial and other scams as some of the pressing issues — which by their nature of being unlawful — need the support of surveillance and intelligence gathering to ensure that projects are target-specific and will result in the broader protection of personnel and learners. “We hope that this will enlighten our stakeholders that DepEd does not only face problems with access, equity and quality education but also has to contend with pressing issues on safety and security,” it said.