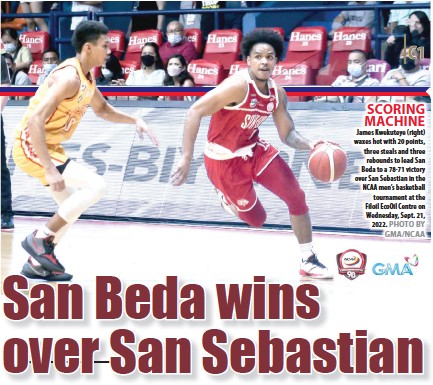 S An Beda Weathered A San Sebastian Fightback From A 23-point Hole To Carve Out A 78-71 Victory And Rediscover Its Winning Ways Wednesday In The Ncaa Men’s Basketball Tournament At The Filoil Ecooil Centre. The Red Lions improved to 2-2 to tie their victims and climb at the upper half of the standings. Determined to rebound from last Saturday’s stunning 81-89 setback to Lyceum of the Philippines University, San Beda ran out the gates with a 25-2 lead. The Stags, however, stormed back behind Jessie Sumoda, Ken Villapando and rookie Rhinwill Yambing to cut the deficit to 57-59 entering the final period. San Sebastian, however, could not break the two-point barrier as San Beda preserved the win. Coach Yuri Escueta gave credit to James Kwekuteye for his hustle to complement his scoring. He led the Red Lions with 20 points, three steals and three rebounds. “Hindi ko siya napanood last season. I know he can score but one thing I appreciate what he is doing right now is his defensive side,” said Escueta on Kwekuteye. “He is working his effort defensively in getting rebounds. Offensively, he is trying to look where the open teammates are. He is trying to read what the defense is giving plus making good decisions on offense.” Peter Alfaro added 11 points and three rebounds, Tony Ynot had 10 points, six boards and four assists, while JB Bahio had a double-double outing of 10 points and 10 rebounds to go with two blocks and two steals for San Beda. Sumoda finished with 19 points and six boards, Villapando had 13 points, seven rebounds, four steals and two assists while Yambing also scored 13 points to go with five boards and two steals for the Stags. After a solid game in San Sebastian’s one-point win over Mapua last Sunday, Rommel Calahat was held to just three points on 1-of-6 shooting from the field.