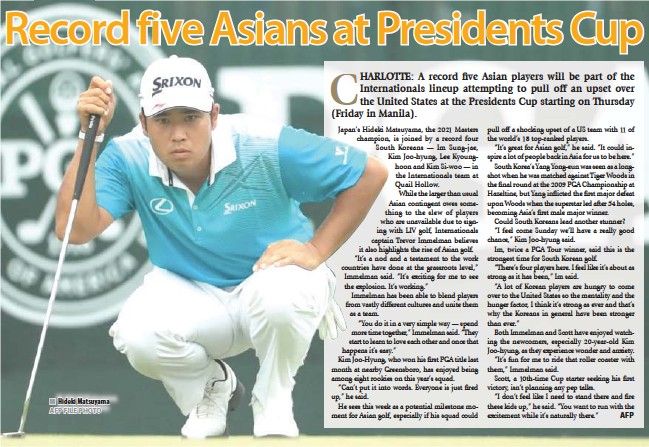 CHARLOTTE: A record five Asian players will be part of the Internationals lineup attempting to pull off an upset over the United States at the Presidents Cup starting on Thursday (Friday in Manila). Japan’s Hideki Matsuyama, the 2021 Masters champion, is joined by a record four South Koreans — Im Sung-jae, Kim Joo-hyung, Lee Kyounghoon and Kim Si-woo — in the Internationals team at Quail Hollow. While the larger than usual Asian contingent owes something to the slew of players who are unavailable due to signing with LIV golf, Internationals captain Trevor Immelman believes it also highlights the rise of Asian golf. “It’s a nod and a testament to the work countries have done at the grassroots level,” Immelman said. “It’s exciting for me to see the explosion. It’s working.” Immelman has been able to blend players from vastly different cultures and unite them as a team. “You do it in a very simple way — spend more time together,” Immelman said. “They start to learn to love each other and once that happens it’s easy.” Kim Joo-Hyung, who won his first PGA title last month at nearby Greensboro, has enjoyed being among eight rookies on this year’s squad. “Can’t put it into words. Everyone is just fired up,” he said. He sees this week as a potential milestone moment for Asian golf, especially if his squad could pull off a shocking upset of a US team with 11 of the world’s 18 top-ranked players. “It’s great for Asian golf,” he said. “It could inspire a lot of people back in Asia for us to be here.” South Korea’s Yang Yong-eun was seen as a longshot when he was matched against Tiger Woods in the final round at the 2009 PGA Championship at Hazeltine, but Yang inflicted the first major defeat upon Woods when the superstar led after 54 holes, becoming Asia’s first male major winner. Could South Koreans lead another stunner? “I feel come Sunday we’ll have a really good chance,” Kim Joo-hyung said. Im, twice a PGA Tour winner, said this is the strongest time for South Korean golf. “There’s four players here. I feel like it’s about as strong as it has been,” Im said. “A lot of Korean players are hungry to come over to the United States so the mentality and the hunger factor, I think it’s strong as ever and that’s why the Koreans in general have been stronger than ever.” Both Immelman and Scott have enjoyed watching the newcomers, especially 20-year-old Kim Joo-hyung, as they experience wonder and anxiety. “It’s fun for me to ride that roller coaster with them,” Immelman said. Scott, a 10th-time Cup starter seeking his first victory, isn’t planning any pep talks. “I don’t feel like I need to stand there and fire these kids up,” he said. “You want to run with the excitement while it’s naturally there.”