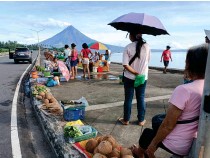 THE Philippine Institute of Volcanology and Seismology (Phivolcs) has raised the alert status to Alert Level 2 over Mayon Volcano in Bicol Region on Friday following its intensified restiveness due to the magmatic movement. In its 4 p.m. advisory, Phivolcs noted that based on its ocular inspection during an aerial survey it conducted earlier today confirmed the presence of freshly extruded lava at the base of the summit lava dome. The event was signalled only by observations of thin re-mobilized light-colored ash, likely derived from lava fragmentation during the extrusion process, it said. “In view thereof, Phivolcs is raising the Alert Level of Mayon Volcano from Alert Level 1 (abnormal) to Alert Level 2 (increasing unrest),” the agency said. “This means that there is current unrest driven by shallow magmatic processes that could eventually lead to phreatic eruptions or even precede hazardous magmatic eruption,” it added. Since the alert level status of the volcano was raised from Alert Level 0 to Alert Level 1 on Aug. 21, 2022, monitored parameters have been generally unremarkable, Phivolcs said. However, daily visual and camera monitoring of the summit crater revealed a continued aseismic growth of its lava dome, it said. As of Oct. 4, 2022, the lava dome has increased in volume by approximately 48,000 cubic meter since Aug. 20, 2022, Phivolcs said. “Precise leveling, continuous GPS (global positioning system) and electronic tilt monitoring show that Mayon has been slightly inflated, especially on the northwest and southeast. Lastly, sulphur dioxide emission last measured on Oct. 1, 2022, averaged 391 tons per day below baseline levels,” it explained. As a reminder, Phivolcs strongly advised the public to be vigilant and desist from entering the six-kilometer radius permanent danger zone to minimize risks from sudden explosions, rock fall and landslides. Phivolcs said that it maintains close monitoring of the volcano and any new development will be communicated to all concerned stakeholders. In case of ash fall events that may affect communities downwind of Mayon’s crater, people should cover their nose and mouth with damp, clean cloth or dust mask. Civil aviation authorities must also advise pilots to avoid flying close to the volcano’s summit as ash from any sudden eruption can be hazardous to aircraft. The last eruption of Mayon Volcano took place in 2018.