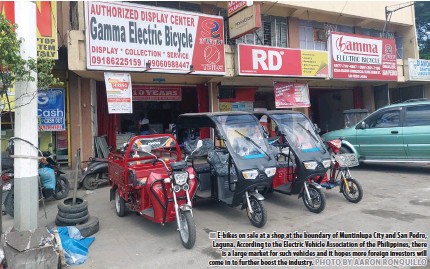 THERE remains a huge market for electric vehicles in the Philippines, according to a top official of Electric Vehicle Association of the Philippines (EVAP), as he expressed optimism that more foreign investors would come in and help boost the industry. In an exclusive interview with The Manila Times, EVAP President Edmund Araga discussed the current state of the country’s EV sector, the various challenges it faces and the ways to address them. He said the EV sector has been confronted by the lack of government support in the previous years, particularly in the area of financing. Araga emphasized the immediate need for sufficient government subsidies similar to what other countries, such as China, provide to their EV industry. “The difference in our setup is that we don’t have any subsidies ... Even the buyers themselves cannot guarantee that they have to have these discounts if they’re going to make use of the EVs,” he said. Araga lamented that not all commercial banks are open to financing, especially for the local manufacturers selling out EVs, particularly e-trikes and e-jeepneys. “Our only takers are the DBP (Development Bank of the Philippines) and LandBank (Land Bank of the Philippines) but as to other financing institutions, there’s none,” he said. “That’s the only irony about that. How can we have it on ground if there would be no takers on the financing? It’s not OK that we, the manufacturers, will be the one to finance it. We don’t have that capability given that producing the units has become capitalintensive,” he added. At present, majority of EV units available in the country are manufactured locally, except for the smaller units that are primarily used for personal mobility and do not need to be government-registered. Citing latest data from the Land Transportation Office, Araga said EVAP has so far distributed and sold about 19,936 EV units, of which about 7,000 are e-trikes, and 5,000 into e-bikes, while the remaining are e-jeeps and e-bus and e-cars. Currently, the private sector is in a better position on procuring EVs compared to that of the government, which takes longer because of biddings, accreditations and bank approvals, among others. To further expand the EVs market in the country, Araga said the EVAP is also looking at the direction of conversion. “As to the point of setting this up, there are no regulations and standards on conversion. That is our problem and we need to address that,” he said. EVAP, however, remains upbeat that more foreign investors would come in. “Market is huge here in the Philippines. If we can convert our ICE (internal combustion engine) vehicles into electric, that would be a big difference,” Araga noted. He also said that at the very early stages of adopting EVs in the Philippines, consumers were concerned about the range, registration and charging stations, all of which had already been addressed in the last few years, with more malls and gas stations setting up their charging networks. “So the anticipation of being on the ground to spread is there. The acceptance of the market is there. More people are enticed to use it, especially on public transportation because they feel like it’s easy to ride electric [vehicles],” said Araga. He cited the case of the Aklan local government employing 500 units of electric car-cycles as their form of public transportation on Boracay Island, which became “widely accepted” and other urban centers are following suit. Meanwhile, Araga stressed the crucial role of Republic Act 11697, or the “Electric Vehicle Industry Development Act” (Evida), which provides for a national policy framework to develop the electric vehicle industry in the Philippines. “We are very optimistic as to the programs already being set and the regulations and standards are there. All we have to do is roll it out and pick up the pieces that are being lost. This is our chance to prove to them that our industry is not easy,” Araga noted.