Messi says 2022 World Cup will be his last 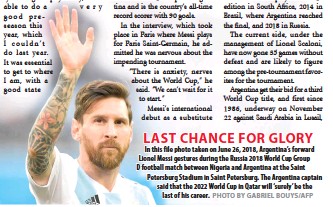 BUENOS AIRES: Argentina captain Lionel Messi said Thursday (Friday in Manila) that the 2022 World Cup in Qatar will “surely” be the last of his career. “It’s my last World Cup, surely. I feel good physically, I was able to do a very good preseason this year, which I couldn’t do last year. It was essential to get to where I am, with a good state of mind and a lot of hope,” the 35-year-old told ESPN Argentina. Messi, who is due to appear in his fifth World Cup, made his international debut in 2005 and has since won 164 caps for Argentina and is the country’s all-time record scorer with 90 goals. In the interview, which took place in Paris where Messi plays for Paris Saint-Germain, he admitted he was nervous about the impending tournament. “There is anxiety, nerves about the World Cup,” he said. “We can’t wait for it to start.” Messi’s international debut as a substitute against Hungary in 2005 lasted just two minutes before he was sent off but he quickly established himself in the national team setup and travelled to Germany for his first World Cup in 2006. He went on to play in the 2010 edition in South Africa, 2014 in Brazil, where Argentina reached the final, and 2018 in Russia. The current side, under the management of Lionel Scaloni, have now gone 35 games without defeat and are likely to figure among the pre-tournament favorites for the tournament. Argentina get their bid for a third World Cup title, and first since 1986, underway on November 22 against Saudi Arabia in Lusail, before further Group C matches against Mexico and Poland. Messi has often struggled to emulate Argentine icon Diego Maradona on the biggest international stage, although was surprisingly named player of the tournament after his team lost the 2014 final to Germany. He only scored once four years ago in Russia as Argentina bowed out with a 4-3 defeat by eventual champions France in the last 16, following a humiliating 3-0 thumping by Croatia in the group stage. But hopes are high that the seven-time Ballon d’Or winner could bow out from World Cups with glory in the Middle East. Messi won the best player award as he led Argentina to last year’s Copa America crown — beating arch rivals Brazil in the final — to win their first major tournament title in 28 years. Qatar will likely provide the last chance for Messi and his longtime rival Cristiano Ronaldo, 37, to finally lift the World Cup.