Refreshing pairings in ‘Flower of Evil’ 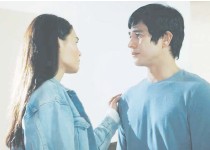 WHEN “Flower of Evil” premiered in June, the focus was on the firsttime pairing of onscreen couple Piolo Pascual and Lovi Poe. The two played husband-andwife Daniel and Iris in the Philippine adaptation of the popular Korean action-drama. Their onscreen chemistry was evident that it made viewers, netizens and even the creatives of the show believe that there was something between them. As such, it was surprising to find out during the finale media conference of the show that it took awhile for Poe to warm up to Pascual and her reason behind it. “She’s very shy. She’s giggly and bubbly but she keeps to herself that we have to ‘forced’ her to come and hangout with us,” Pascual recalled. For her part Poe was conscious of the modern-day icon playing opposite her. “Sometimes you’d think someone as huge of a star as him, would have even a tiny bit of ‘air’ but not a single bit from Piolo,” the actress elaborated. When they finally broke the ice and started rolling, Pascual was nonetheless impressed with what he saw in Poe, on and off the camera. “One thing you gotta appreciate about Lovi, she comes prepared on the set — she wakes up earlier so she could do her workouts, so she could look as good, sobra yung discipline nya.” Acting-wise, Pascual added, “Yung binigay nya sa akin sa show na ito, sobra-sobra. I became a fan of her and after knowing her respect for the craft, her willingness to even go further. She showed these the whole time and she never wavered.” The “Ultimate Leading Man” also did not scrimp in praising another actor he had the opportunity to work with for the time as well — Paolo Avelino. Avelino plays the antagonist Jacob who’s evil plans put Pascual and Poe’s characters to dangers. “What’s good about Pao, is his commitment, the kind na talagang matatakot ka sa set. He would isolate himself [to get into a dark character]. When we’re on the set, no matter how long scenes would take, wala ka ring maririnig na complaint. “To add, he’s very supportive. Talagang mapu-push ka rin sa limit mo which is really good because it [acting] is a collaboration. Ang saya ng experience, sobra, nakakabitin,” he added. And just like the female lead Poe, Avelino is equally surprised to find out who the real Pascual is as a co-star. “It’s an achievement yung mga hinahangaan ko dati, nagkakaroon ka ng oportunidad na makatrabaho sila at matuto sa kanila. Takeaway ko kay Papa P is behind the camera is always about being humble,” Avelino finally said. The last two episodes of Flower of Evil will air tonight and tomorrow on free TV. Will Daniel and Jacob make it out alive? Will Iris succeed in proving Daniel’s innocence so that they can start anew as a family? Watch the killer finale of “Flower of Evil” on Kapamilya Channel, A2Z, and Jeepney TV this weekend at 9 p.m.