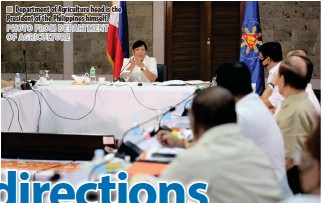 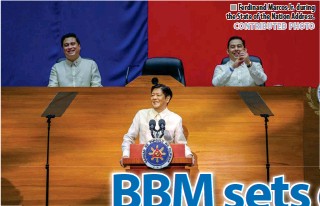 THE Department of Agriculture being lead by the president himself, Ferdinand “Bongbong” Marcos Jr., brings a new dimension to the development of the country’s farming and fishery sector, especially now that the global food system has been shocked by the current geopolitical crisis. With the president being the Agriculture secretary, the DA can proceed with more political will in implementing high-impact programs for farmers, fishers and agribusiness companies. One of President Marcos’ first move to ensure the country’s food security is to give the DA a higher budget for next year, or P163.7 billion, which is P46.5 billion higher than 2022’s P117.2-billion allocation. Besides ensuring the country’s food security, the chief executive sees agriculture as contributing to Philippine economic growth and generating employment. It was during his First State of the Nation Address (SONA) last July when President Marcos highlighted the importance of the country’s agriculture sector in fueling growth and employment in the country. “One of the main drivers of our push for growth and employment will be in the agricultural sector,” he said. And consistent with his pronouncements since he took over the reins of the DA, the President will make Philippine agriculture one of his priorities by pushing for the mechanization and modernization of the sector. He has also committed the undertaking of more scientific research and development to improve the local poultry, livestock and fishery industries. Also in the priority of President Marcos as Agriculture secretary is the building of more theµ farm-to-market roads (FMR) and infrastructure, and he tasked Department of Public Works and Highways to take charge of that. The chief executive said that FMRs are important to the development of the country’s agricuture sector as these facilitate the delivery of farm inputs and products from the farms to the trading centers. His administration will also focus on post-production and processing to add value to agricultural products so farmers can have higher incomes. Ramping up rice production And keeping with his promise to make the Philippines attain a higher level of food security, President Marcos is eyeing a higher output for palay (unmilled rice) for 2023, or a new record of 20.24 million metric tons (MT) through a higher budget for the existing Rice Program to complement the Rice Competitiveness Enhancement Fund implementation. For 2022, the DA National Rice Program is projecting palay output to reach 19.50 million MT. In 2021, domestic palay output reached a record 19.96 million MT, or 3.4 percent more than the 19.29 million MMT in 2020. To increase the country’s palay production, the DA, as ordered by President Marcos, distributed high quality seeds, fertilizer discount vouchers, biofertilizers, and farm machinery and equipment to farmers. As of August 31, 2022, a total of 527,071 bags of hybrid seeds and 479,483 bags of certified seeds were distributed to eligible farmer-beneficiaries to cover 1.006 million hectares. For the fertilizer discount, 634,298 vouchers were already generated amounting to P1.13 billion covering 674,558 hectares. Out of these generated vouchers, 174,996 vouchers amounting to P322.76 million have been claimed to cover 198,953 hectares. In addition, 83,832 packs of BioN were distributed nationwide, covering 14,766.40 hectares of rice fields. The DA Rice Program also distributed 442 production and post-harvest machinery and equipment including tractors, harvesters, rice mills, hauling trucks, and dryers, and established 24 drying facilities. Furthermore, 282 projects consisting of diversion dams, shallow tube wells, and 6,787 linear meters of irrigation canals were constructed to serve an area of 1,449 hectares. Rehabilitation of Small-Scale Irrigation Projects were also done, restoring up to 393 hectares of irrigated rice areas. This includes the rehabilitation of 5,045 linear meters of irrigation canals and four diversion dams. The DA also facilitates trainings with individual rice farmers to equip them with knowledge on leadership and management, soft skills, project management, digital tools for agriculture, and agri-entrepreneurship. By the end of the term of PResident Marcos, it will no longer be a surprise that the Philippines will attain at least 100-percent self-sufficiency in rice and major food items. This, as President Marcos succeeded in getting the nod of Congress to give the DA a hefty budget for 2023, and setting the general direction for the agriculture’s sector development in the next six years of his administration.