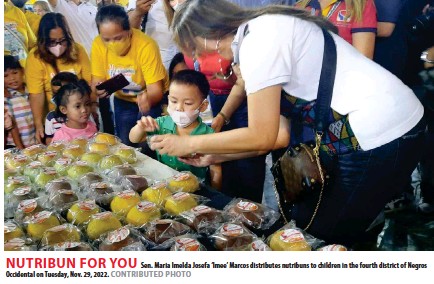 BACOLOD CITY: The national government has no choice but to rely on importation to address the rising prices of some basic food commodities, Sen. Maria Imelda Josefa “Imee” Marcos said here on Tuesday, November 29. Marcos noted that currently red onions are sold in the market for as much as P300 per kilo. “It’s a nightmare right now,” Marcos said. Marcos said that she is urging the Department of Agriculture (DA) “to start importing to address the situation.” The DA is led by her brother, President Ferdinand Marcos Jr. However, Marcos clarified that the importation should only be in small volumes so as not to cripple the local farmers. “We are also having problems with the small volume of fish in the market,” she said. “So we also need to import, too. But the importation of fish should not include tilapia and milkfish to protect our local fishermen.” Marcos said the prices of chicken and pork have now stabilized. Marcos visited Bago City yesterday to lead the payout of the government’s Assistance to Individuals in Crisis Situations (AICS) to about 1,000 beneficiaries from the fourth district of Negros Occidental at the Ramon Torres Cultural and Sports Center. Each beneficiary received P3,000 in cash aid. “We are also looking at farmers and fishermen affected by recent calamities on how to help them,” she added. Marcos also committed to give P5 million to each local government unit in the district. The fourth district of Negros Occidental is composed of the cities of Bago and La Carlota and the municipalities of Valladolid, Pulupandan and San Enrique. “We should not have a hungry Christmas for Filipinos,” Marcos said.