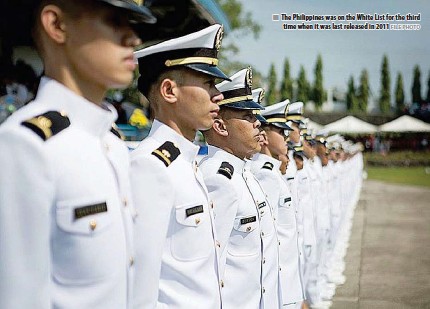 MORE than 400,000 Filipino seafarers deployed on international vessels benefit from the country’s inclusion on the International Maritime Organization’s (IMO) “White List,” Brenda Pimentel, former regional coordinator of the International Maritime Organization (IMO) in East Asia, said. The IMO White List is composed of countries compliant with the International Convention on Standards of Training, Certification and Watchkeeping. The STCW Convention is the reference used by foreign auditors inspecting the level of compliance of IMO member states with international maritime standards. “That convention sets a minimum standard for all seafarers. It levels the playing field for seamen of all nationalities to be hired by any ship owner. It requires a Whitelist, however — those who have complied with the requirements set by IMO. Without this, a seafarer cannot be hired,” Pimentel said in an interview on Saturday with SMNI News Channel’s “Business and Politics” program host Dante “Klink” Ang 2nd, the chairman and CEO of The Manila Times. This also affirms the capacities and diligence of the Maritime Industry Authority (Marina) in ensuring the competencies of Filipino seafarers, which took over the functions of the abolished Maritime Training Council under the Department of Labor and Employment. The Philippines was included in the White List for the third time when it was last released in 2011. “Port States will consider a foreign ship, regardless of the flag unseaworthy if the crew onboard are certificated by countries which are not in the IMO whitelist. Therefore if the Philippines fails to maintain its status in the White List, shipowners will shy away from hiring Filipino seafarers.”Pimentel explained. According to the Philippine Overseas Employment Administration, 469,996 Filipino workers were onboard merchant shipping vessels around the world in 2019. If removed from the White List , the Philippines will lose the certificate of recognition, thus, leaving tens of thousands of Filipino seafarers onboard all international vessels jobless. Train for safety “The problem arises in the way we implement STCW because it is a safety convention, not labor. There should be a paradigm shift, a change of mindset that we are training our seafarers not just to go abroad and earn dollars but to keep the ships and oceans safe,” Pimentel emphasized. She added that policies implemented by the government with regards to STCW must be clear with a topline objective of keeping lives and properties at seas safe. “There is no cohesive implementation of the regulation amongst government agencies, it is conflicting,” Pimentel said. Pimentel cited the curriculum development for maritime higher education institutions (MHEIs) which is placed under the Marina, the single maritime administration responsible for the implementation and enforcement of the STCW Convention. “There are pedagogical [approaches] in curriculum development, which is the core function of the Commission on Higher Education. Are they (Marina) qualified for that? Why do you have to do that when you already have an agency that is supposed to have that expertise?” she maintained. Pimentel furthered that agencies change the curriculum every two years for a course that is slated for four years. “Students are still not done with the full four-year course when they change the curriculum. MHEIs would comply with the requirement of having millions of pesos worth of simulators and be told later that it was no longer needed. “Our regulation must be very clear. Is it the way we teach our cadets or the facilities that we need to address?” she asked.