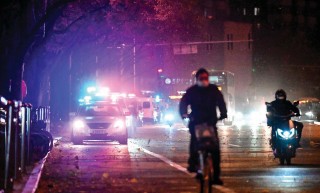 SHANGHAI: China’s capital Beijing and financial hub Shanghai were blanketed with security on Tuesday in the wake of nationwide rallies calling for political freedoms and an end to coronavirus lockdowns. The Chinese leadership is facing a wave of protests not seen in decades, fueled by anger over the unrelenting lockdowns, as well as deep-rooted frustrations over China’s political direction. A deadly fire last week in Urumqi, the capital of northwestern China’s Xinjiang region, was the catalyst for public outrage, with protesters taking to the streets of cities across the country over the weekend. The demonstrators said Covid-19 restrictions were to blame for hampering rescue efforts — claims the government denied as it accused “forces with ulterior motives” of linking the fire to the strict virus measures. ‘So many police’ Several protests were planned for Monday night, but did not materialize, with Agence France-Presse (AFP) journalists in Beijing and Shanghai noting a heavy police presence of hundreds of vehicles and officers on the streets. People who had attended rallies over the weekend told AFP on Monday they had received phone calls from law enforcement demanding information about their movements. In Shanghai, near a site where weekend protests saw bold calls for the resignation of President Xi Jinping, bar staff told AFP they had been ordered to close at 10 p.m. for “disease control.” Small clusters of officers stood outside each train exit. Throughout the day, AFP journalists saw officers detaining four people, later releasing one, with a reporter counting 12 police cars within 100 meters along Shanghai’s Wulumuqi street, the focal point of Sunday’s rally. “The atmosphere tonight is nervy. There are so many police around,” a man in his early 30s told AFP as evening fell. And with police cars, foot patrols and a network of surveillance cameras, and aided by the icy wind, Beijing authorities also appeared on Monday to have deterred fresh gatherings. Elsewhere, some rallies did go ahead. In semiautonomous Hong Kong, where mass democracy protests erupted in 2019, dozens gathered at the Chinese University to mourn the victims of the Urumqi fire. And in Hangzhou, just over 170 kilometers (106 miles) southwest of Shanghai, there was strict security and sporadic protests in the city’s downtown, footage circulating on social media and partly geolocated by AFP showed. ‘Many died in vain’ China’s strict control of information and continued travel curbs have made verifying the numbers of protesters across the vast country challenging. But such widespread rallies are exceptionally rare, with authorities harshly clamping down on all opposition to the central government. Around the world, solidarity protests have also mushroomed. In the United States, Chinesespeaking and Uyghur communities came together in vigils. “Officials are borrowing the pretext of Covid, but using excessively strict lockdowns to control China’s population,” one 21-year-old Chinese attendant who gave only his surname, Chen, told AFP. “They disregarded human lives and caused many to die in vain.” ‘No longer afraid’ China’s leaders have remained steadfast in their commitment to their zero-Covid policy, which compels local authorities to impose snap lockdowns, quarantine orders and limit freedom of movement in response to minor outbreaks. But there are signs that some local authorities are taking steps to relax some of the rules and dampen the unrest. In Urumqi, an official said on Tuesday the city would give a oneoff payment of 300 yuan ($42) to each person with “low income or no income,” and announced a five-month rent exemption for some households. People in the city of 4 million — some of whom have been confined to their homes for weeks on end — can also travel around on buses to run errands within their home districts starting on Tuesday, officials said. In Beijing, state media reported that authorities had apologized for delayed deliveries to residents as online shopping demand surges due to repeated lockdowns. The city has also banned “the practice of barring building gates in closed-off residential compounds,” state-run Xinhua News Agency said on Sunday.