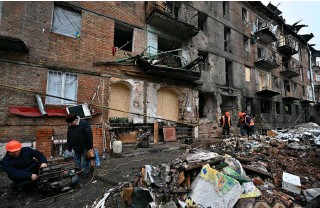 KYIV: Russia held back on Monday from launching a new round of strikes that have been expected against power stations and other key infrastructure in Ukraine, as officials warned a lingering energy and water crisis from earlier attacks could prompt more evacuations from the capital. Ukrainian Foreign Minister Dmytro Kuleba, while hosting the largest delegation of top foreign officials since Russian President Vladimir Putin sent his troops into Ukraine over nine months ago, insisted that better air defenses were needed from allies “to break this vicious cycle” of Russian air strikes followed by Ukrainian rebuilding of damaged infrastructure. “Every time we will be restoring it, the Russians will be destroying it,” he told counterparts from seven Baltic and Nordic countries. Kuleba’s counterparts from Estonia, Latvia, Lithuania, Iceland, Sweden, Norway and Finland pledged more military, economic and humanitarian aid as an energy crisis deepens and Ukrainian forces seek to move on with a counteroffensive against Russian troops. Sweden said it had provided a 270-million-euro ($279 million) package of air defense systems, ammunition, all-terrain vehicles and personal winter gear for troops. Finland pledged to take in more Ukrainian refugees. In Washington, White House National Security Council spokesman John Kirby said the United States was working with partners and allies to provide energy and water replacement equipment to Ukraine. In Israel — which has straddled a fine political line in the conflict — Channel 13 reported that a highlevel Ukrainian delegation recently visited to discuss an Israeli pledge to provide a system that detects incoming missiles. Israel’s Defense Ministry declined to comment. The Jewish state has voiced support for Ukraine, but has refused so far to provide it arms or impose sanctions against Moscow because of its sensitive ties with Russia. Israel’s and Russia’s militaries communicate to avoid conflict in Syria. Israel also does not want to endanger the large Jewish community in Russia. Ukrainian President Volodymyr Zelenskyy warned on Sunday night that Russian troops “are preparing new strikes, and as long as they have missiles, they won’t stop.” He met with senior government officials on Monday to discuss what actions to take. “The upcoming week can be as hard as the one that passed,” he predicted. North Atlantic Treaty Organization (NATO) Secretary-General Jens Stoltenberg insisted that Putin was intent on using frost, snow and ice to his advantage, not only on the battleground, but also against Ukrainian civilians. “President Putin is now trying to use the winter as a weapon of war against Ukraine, and this is horrific and we need to be prepared for more attacks,” he said on the eve of a twoday meeting of NATO foreign ministers — including those who visited Kyiv on Monday — in Romania’s capital Bucharest. “That’s the reason why NATO’s allies have stepped up their support to Ukraine.” Kyiv Mayor Vitali Klitschko said some of the city’s 3 million people might have to be evacuated to where essential services would be less prone to shutdowns caused by missile attacks. For weeks, Russia has been pounding energy facilities around Kyiv and other Ukrainian cities with missile strikes, usually on Mondays at the work week’s beginning, resulting in outages of power and water supplies. Based on the pattern of infrastructure attacks and the Russian military’s preparation time, an adviser to Ukraine’s interior minister said on national television that the next strikes could occur in another week. A Ukrainian military spokesman also said on national TV that Russian aircraft had intensified their activity over the country on Monday. With temperatures hovering around freezing, and expected to dip as low as minus 11 C (12 Fahrenheit) in little more than a week, international help was increasingly focused on items like generators and transformers, to make sure blackouts that affect everything from kitchens to operating rooms are as limited and short as possible. The power situation was so dire that Ukraine’s energy trader — in normal times an exporter — tested importing electricity from neighboring Romania.