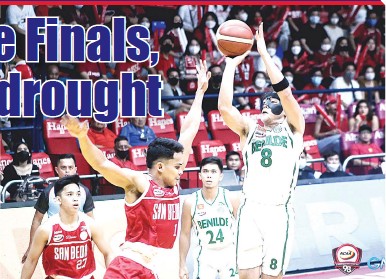 DE La Salle-College of Saint Benilde ended a 20-year Finals drought after escaping with a 62-61 victory over San Beda University on Tuesday in the National Collegiate Athletic Association (NCAA) Season 98 men’s basketball Final Four at the FilOil EcoOil Centre. Ahead by three down the stretch, the Blazers forced the Red Lions’ James Kwekuteye to miss two three-point attempts, with the last one looking to be halfway down but rattled off the rim at the last moment. Kwekuteye’s three-pointer would have sent the game into overtime. Damie Cuntapay then scored on a putback with 0.4 seconds left in the clock for the final tally as the multi-titled Red Lions failed to make the NCAA Finals for the second straight season. “It feels great (to make the Finals) to be honest. I thank the Lord. This wouldn’t be possible without Him. I’m just thankful right now. We had some luck down the stretch but I guess, sometimes, that’s just basketball,” said coach Charles Tiu of the Blazers who carried a twice-to-beat advantage in the semis. Migs Oczon poured 17 points and six rebounds to lead the way for St. Benilde even as Most Valuable Player award frontrunner Will Gozum also came through with 10 points and 11 rebounds. James Pasturan chipped in 16 points and four boards and Migs Corteza added seven points and 12 rebounds for the Blazers. On a mission to make the Finals for the first time since 2002, the Blazers took control of the contest from the start, leading by as many as 13 points. They were still ahead by 11 points, 54-43, following a Migs Oczon free throw when the Red Lions ignited a rally. San Beda unleashed an 11-2 run to pull within two, 54-56, after a Jacob Cortez basket with 5:58 left in the game. The Red Lions, eventually, got within a point, 59-60, following a Kwekuteye triple with 14.4 seconds to go. Oczon stretched St. Benilde’s lead to three with two made free throws. With 12.7 ticks left, the Red Lions had enough time to send the game to overtime but Kwekuteye missed back-to-back triples. Kwekuteye, who just played his last game in the NCAA, finished with 11 points, nine rebounds, two assists and two steals. Jacob Cortez topscored for San Beda with 13 markers laced with his two rebounds and two assists. JB Bahio chipped in nine points and seven boards in also his final game in the NCAA. The Scores: St. Benilde (62) – Oczon 17, Pasturan 16, Gozum 10, Nayve 8, Corteza 7, Sangco 4, Cullar 0, Carlos 0, Marcos 0, Lepalam 0, Lim 0. San Beda (61) – Cortez 13, Kwekuteye 11, Bahio 9, Sanchez 8, Ynot 6, Cuntapay 4, Andrada 3, Cometa 3, Alfaro 2, Visser 2, Payosing 0. Quarters: 19-14, 34-31, 54-48, 62-61.