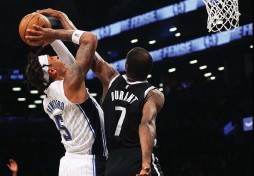 LOS ANGELES: Kevin Durant scored a seasonhigh 45 points to power Brooklyn to a 109102 NBA victory over the Orlando Magic on Monday (Tuesday in Manila) that kept the Nets trending in the right direction. While the league-leading Boston Celtics romped again, leading wire-to-wire in a 140105 victory over the Charlotte Hornets, the Philadelphia 76ers erased a 16-point deficit to beat the Atlanta Hawks 104-101 in star center Joel Embiid’s return from injury. In Brooklyn, the Nets had their hands full early with the Magic, who led by 10 in the first quarter. The Nets were up by one at halftime, and Durant erupted in the third quarter, scoring 19 points, blocking two shots and coming up with a steal in the period as the Nets seized control. “Teammates set great screens for me, the paint was opened up because we were spaced off properly and I was able to knock some shots down,” Durant said after the game. It’s been a rocky season for Brooklyn, who had just sacked coach Steve Nash in the wake of a 1-5 start when star guard Kyrie Irving was embroiled in controversy after posting a link to an anti-Semitic film on social media. Durant, who was a ruthlessly efficient 19 of 24 from the floor and also had seven rebounds and five assists, was delighted to see them put together back-to-back victories and move to 11-11 for the season. Irving added 20 points and Nic Claxton scored 16 points with 13 rebounds for the Nets. It was business as usual in Boston, where Jayson Tatum returned from a one-game absence to score 35 points and sat out the fourth quarter with the game well in hand.