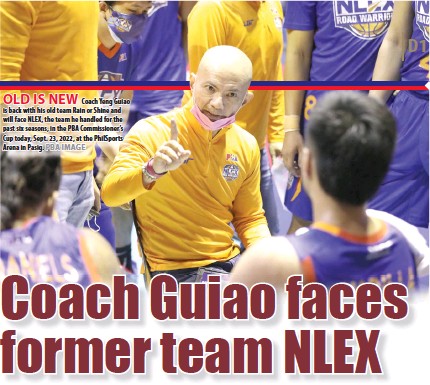 FOR the first time in six years, multi-titled head coach Yeng Guiao will face his old team NLEX as he makes his first coaching stint this year with Rain or Shine, the team he left for the Road Warriors in 2016. Game time is 5:45 p.m. today, September 23, in the PBA Commissioner’s Cup at the PhilSports Arena in Pasig City. Guiao led the Elasto Painters to two PBA championships in the 2012 Governors’ Cup and 2016 Commissioner’s Cup before leaving the team to handle the Road Warriors. With Guiao on the bench, NLEX has become a perennial playoff contender but failed to win the crown. Now, he returns to Rain or Shine with not too many familiar faces on the team. Only Gabe Norwood, Beau Belga and Jewel Ponferrada are left from those Rain or Shine championship teams that he had coached. The 63-year-old Guiao, however, can rely on young guns Rey Nambatac, Santi Santillan and Mike Nieto as well as import Steve Taylor in his bid to give Rain or Shine another title. Opposite Guiao is veteran collegiate coach Frankie Lim, who makes his first stint as a PBA coach since being at the helm for Barangay Ginebra in 2015. He returns as a coach for the first time since mentoring the Perpetual Help Altas from 2018 to 2019. Lim signed with NLEX just last Tuesday and barely has two days to practice with the team. With rising star Calvin Oftana as well as Raoul Soyud traded to TNT, Lim will have to bank on Don Trollano, Kevin Alas, Justin Chua, and former NBA player Earl Clark, whom Guiao personally chose as reinforcement for NLEX. Meanwhile, the Terrafirma Dyip and the Converge FiberXers are also going to play their first game of the conference as they collide in the first game of the day’s twin bill at 3 p.m. Converge debuted in the Philippine Cup and ended up at seventh place in the conference. New FiberXers coach Aldin Ayo is hoping to be in the mix for a Final Four spot in the Commissioner’s Cup with the help of import Quincy Miller, the 38th pick of the 2012 NBA Draft. Terrafirma, on the other hand, will parade a returning import in Lester Prosper.